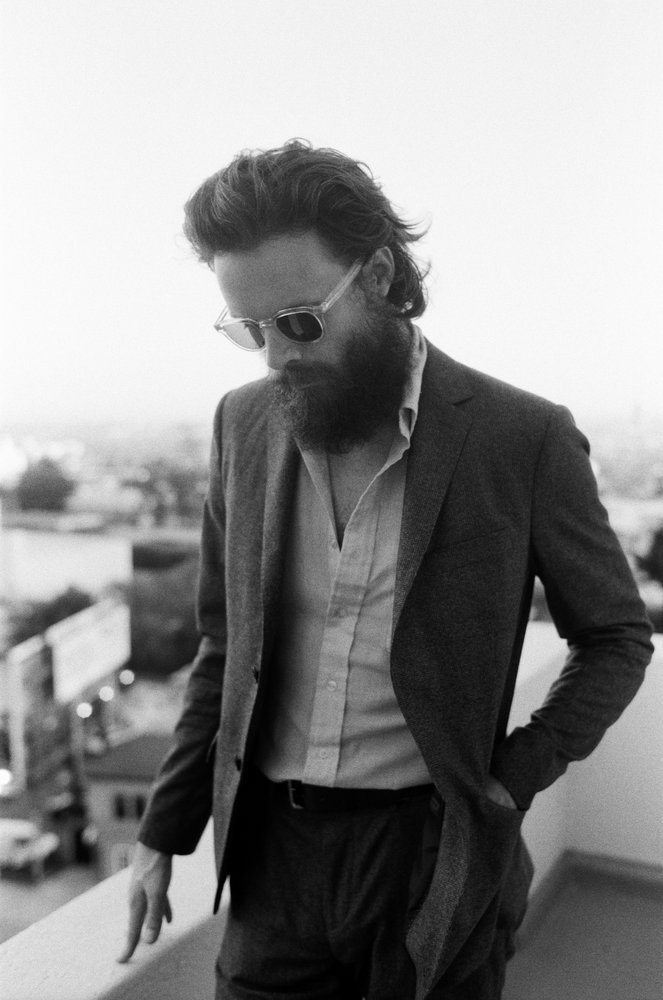 …When you’re smiling and astride me

I’ve got nothing to hide from you

There will be a convergence of forces when Father John Misty takes the stage at The 25th Meredith around Sunset on Saturday Night, and I’m going to momentarily resist adjectives: There’s the man himself, there’s his music, and his band. Then there’s his popularity, and there will be anticipation, and excitement. And there’s Sunset, on the second night, in the Supernatural Amphitheatre: the sweet spot.

“If anyone knows what to do with a sweet spot, it’s Father John Misty”.

Expectation, convention be damned. Father John Misty has ascended. He’s not working from a script, there’s no blueprint. His lucid looseness undoes custom’s blouse. He deals in true fun and freedom, flourishing almost perversely from a deep bedrock of brutal raw honesty and enlightened directness. He can also be filthy, and hilarious. His live shows are beyond everything. He’s wilfully out of bounds, and you’re coming too.

“a rock star wired to a lie detector”

FJM has been the revelation of recent cultural times. “I Love You, Honeybear” is the album of the year, his songs have become sleeper anthems, his interviews and TV appearances are merely opportunities to do something remarkable, and live performances are an experience beyond the sum of their parts, albeit that those parts are truly special (I’ve spent the morning trying to obsessively accrue them: superb spiritual singer; songwriter for the ages; soulful, hip-shaking no-rules showman, frontman for a cracking band; satirist, social commentator; banter king; romantic poet; novelist, philosopher, perfumer – Innocence, by Misty exists because “I believe very strongly in how young women smell, getting involved is a big cornerstone in our inactive democracy” – teller of eternal truths, fibber of elaborate lies, film-scorer, chameleon, ideal husband, formerly-aspiring preacherman, and very human being).

Maybe love is just an economy based on resource scarcity 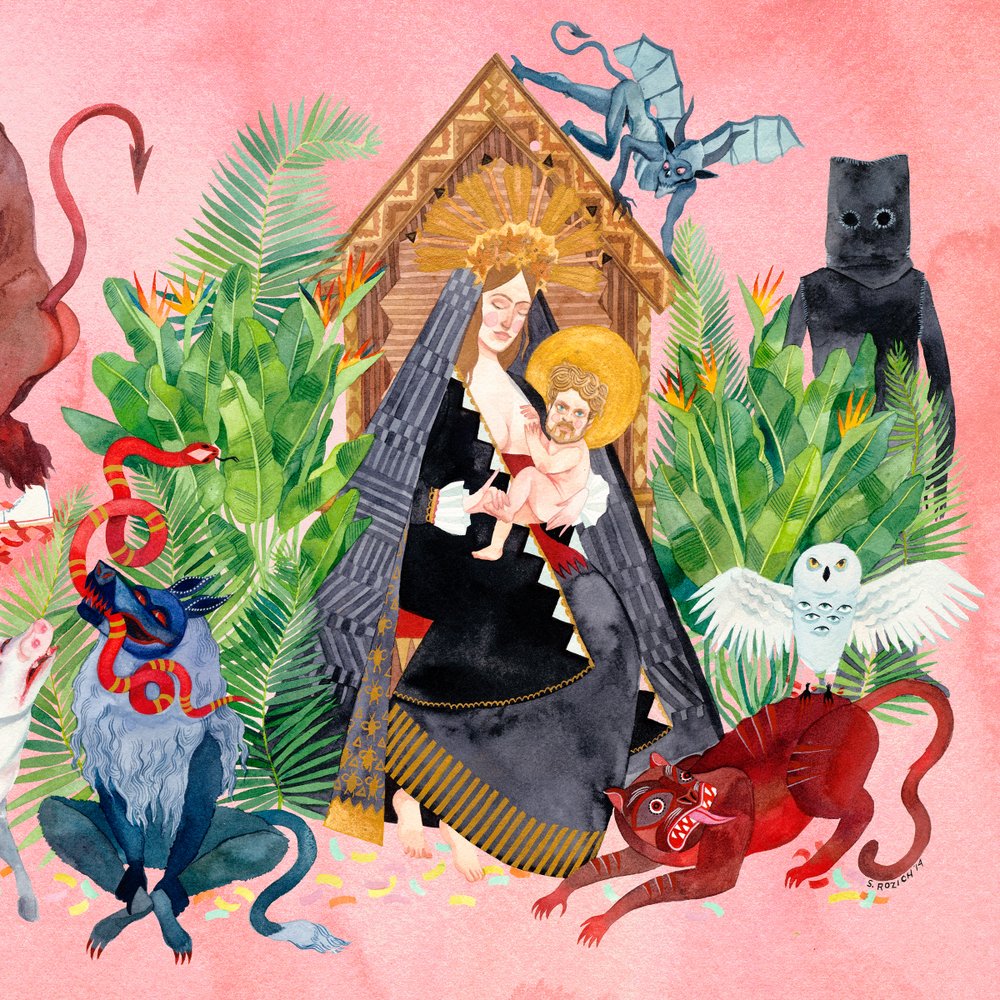 It’s early days, but he’s drifting up into the pantheon of all-timers, and the joy of it is that he’s around, creating and sharing NOW.

Truth Is Stranger Than Fiction

Where does Father John Misty start and Joshua Tillman end? Who cares.

Josh Tillman was born May 3, 1981, and grew up in a deeply religious, “culturally oppressive” Evangelical Christian household in Rockville, USA. Until he was about 17, religious music was the only music he heard. His parents eventually permitted some that had a “spiritual theme”, like Bob Dylan, and a light was turned on.

He became a musician, worked odd jobs to fund it, was the drummer for Fleet Foxes and released solo albums under the name J Tillman, which were released by prestigious labels and well received. He was going ok.

But then came an epiphany.

“With the J Tillman touring I realised that I was more entertaining in my two minutes of between-song banter than I was in like five or six minutes of song, but I didn’t regard that banter as really being a moment of creativity, which ultimately it was…a very depressing realisation all of sudden became a very illuminating realisation, which was like ‘here’s where your gifts are, you don’t get to choose what you’re good at, use that’. Once I started doing that it reduced a lot of the dissidents that had previously been part of the creative process for me.”

What followed was a phase of highly imaginative output which supercharged his journey into the hearts and minds of modern lovers all over.

On the first day, he created Father John Misty.

In the first song as the new Him he sings:

It was the word, and the word was good. Ha!

He’s been on a wildly entertaining trip ever since, intrepidly chronicling his encounters with modern life’s small moments and big questions. 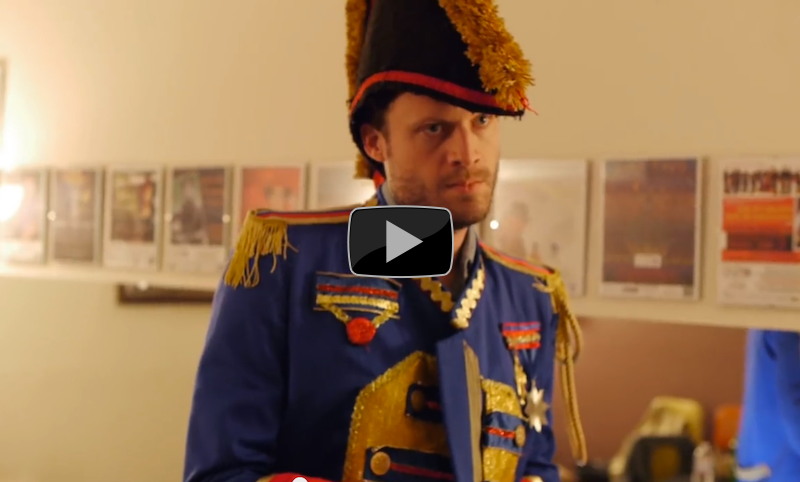 He can really sing, he can be hilarious, there’s rollicking good times in his shows, and the myth and mystique of the man are magnetic, but for me his ultimate gifts are his love songs.

This one completely kills me. It’s about (I think) absurd fickle chance, the tiny tenuous link that turns nothing into everything, and the nebulous dimensions of that diabolical deal:

We met in a parking lot
I was buying coffee and cigarettes
Firewood and bad wine long since gone
But I’m still drunk and hot, wide awake, breathing hard
Now, in just one year’s time
I’ve become jealous, rail-thin
Prone to paranoia when I’m stoned
If this isn’t true love, someone oughta put me in a home
Say, do you wanna get married
And put an end to our endless progressive tendency to scorn
Provincial concepts like your dowry and your daddy’s farm?

Let’s buy a plantation house and let the yard grow wild until we don’t need the signs that say, “Keep out”
I’ve got some money left and it’s cheaper in the South
I need someone I can trust to protect me from our seven daughters when my body says, “Enough!”
Don’t let me die in a hospital, I’ll save the big one for the last time we make love
Insert here a sentiment re: our golden years
All cause I went to the store one day
“Seen you around, what’s your name?” 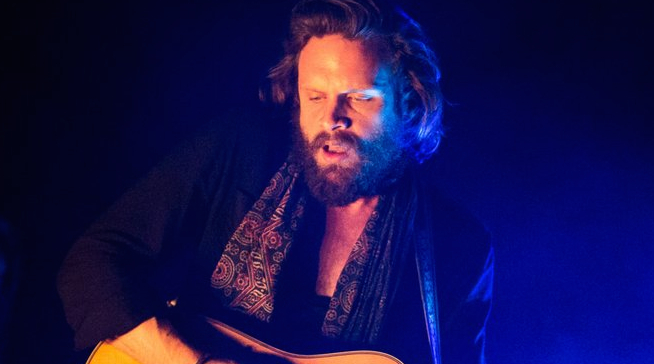 “I Love You, Honeybear is a concept album about a guy named Josh Tillman who spends quite a bit of time banging his head against walls, cultivating weak ties with strangers and generally avoiding intimacy at all costs.

In a parking lot somewhere he meets Emma, who inspires in him a vision of a life wherein being truly seen is not synonymous with shame, but possibly true liberation and sublime, unfettered creativity.

The album progresses, sometimes chronologically, sometimes not, between two polarities: the first of which is the belief that the best love can be is finding someone who is miserable in the same way you are and the end point being that love isn’t for anyone who isn’t interested in finding a companion to undertake total transformation with. I won’t give away the ending, but sex, violence, profanity and excavations of the male psyche abound.

My ambition, aside from making an indulgent, soulful, and epic sound worthy of the subject matter, was to address the sensuality of fear, the terrifying force of love, the unutterable pleasures of true intimacy, and the destruction of emotional and intellectual prisons in my own voice.

The massive, deranged shmaltz I heard in my head, and knew had to be the sound of this record, originated a few years ago while Emma and I were hallucinating in Joshua Tree; the same week I wrote the title track. I chased that sound for the entire year and half we were recording. The means by which it was achieved bore a striking resemblance to the travails, abandon and transformation of learning how to love and be loved; see and be seen. There: I said it. Blammo.”

I Love You, Honeybear

SUPPLIMENTARY CONTENT: INSTRUCTIONS FOR LISTENING
I LOVE YOU HONEYBEAR

Take blazing August morning and position itchy mouth and hot ocean anywhere within. Cough and clear throat (should taste like tar).  Roll your slackened, puffy body onto the body of your loved one.  Using your semi-hard-on, attempt to make display of virility and imperviousness to hot ocean of brown liquor in your stomach.

Next, drive across town in absurd vehicle and, using your $60, buy 2 (two) rounds of lattes at historic Hollywood hotel for you and loved one.  Place marbles in mouth and attempt to describe inexplicable, looming dread.

Note: Lavish diversions will provide no significant relief from ILD

Take his/her suggestion to make a trip to the desert.  No one will be there as it is August and hot as all get out.

While in desert, rapidly alternate between fey attempts at your best impression of a “happy-go-lucky” disposition and the black, all-consuming desolation you feel.  Convince yourself that in order to maintain the affection and respect of loved one you must anesthetize, and condescend to, your own pain.

Using your intellect, isolate yourself from the legitimacy of your experiences (see: Mommy, God, etc).  Keep believing that self-deprecating jokes and self-analysis are effective ways to 1.) appear in control and maintain aforementioned affection and respect from loved one and 2.) minimize true intimacy which would definitely, according to your fear, result in loved one realizing what a, like, characterless, weak, emotionally stunted little shit you are.

Simultaneously, use the ego to nourish pain and establish its singular, unique nature in all cases applicable to you.

Repeat until you feel fucking crazy.

Note: You are fucking crazy.  The world is fucking crazy.  Our appetites and needs and fears are all fucking crazy.  Until you realize this for yourself you will remain incapable of taking refuge in, or even identifying, another person who realizes the same thing.

With loved one, aimlessly walk into desert.  Just keep walking and walking.

Climb up on to a gigantic rock.

Watch as loved one walks further and further away until he/she is about pocket-sized. Watch them crawl up onto a gigantic rock.

Wave at each other – note how small the other person’s insecurities, doubt, and pain appear to you, and conversely, how small yours must appear to them.

Savor moment of clarity and accompanying dissipation of isolation and dread.

Note: You in fact have not walked very far but have simply just made one gigantic lap around the rental house.  You laugh maniacally.

You are now very hungry.  Take ¼ lb. ground beef and vigorously knead in salt and pepper with clean hands.  Form into patties and grill over an open flame to your preference.